The celebrity Latinx director and co-creator of the newly released Netflix original series, Gentefied, will detail the relationship between the Census and aspects of his own life as a  Kern County native during the first portion of the program. He will also illustrate the potential impact of the Census on low-income immigrant communities through the lens of the Gentefied story. The interactive Census program will be broadcast through his personal Instagram account @elmarvinlemus on Thursday, April 16th at 11:30am.

CNC EF has partnered the California Census as well as with an array of community organizations to reach hard to communities, many of which  include Latino and immigrant residents. Learn more and complete the 2020 Census at www.cuentaconmigo2020.org. 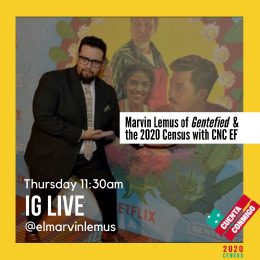 Who: CNC EF and Marvin Lemus on Instagram Live: @elmarvinlemus